A foundation for families

A foundation for families

Melissa Ostenson and Elijah Lminggio lost their family’s only income when he was injured in a car crash.

They had only enough money for two months’ rent. When it was gone, they and their four children, all under age 5, were evicted from their Janesville home.

They found shelter at Twin Oaks, an emergency homeless shelter in Walworth County run by Community Action Rock and Walworth Counties. The one room with a bathroom was their home for the six months. 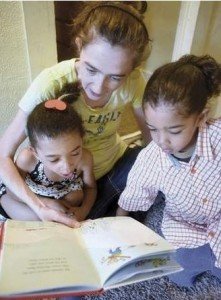 Although the shelter’s policy is to only house guests for 90 days, Ostenson and Lminggio were allowed to stay after meeting eligibility requirements for the nonprofit organization’s Transitional Living Program.

“I cried, I was so excited,” Ostenson said.

The program helps low-income families—most with children–stabilize in their community so they are able to provide for themselves, said Sue Katzer, housing services manager.

“People have to be literally homeless or at imminent risk—going to be homeless within two weeks—of being homeless,” she said.

The program started in Rock County more than a decade ago and in Walworth County in September 2013, she said.

Community Action leases units and sublets them to program participants. Community Action pays the rent and takes responsibility for maintaining the condition of the apartments.

About 90 percent of the program is funded through federal Housing and Urban Development grants. The rest comes from the United Way in Rock and Walworth counties, Katzer said.

“Usually, we have 90 folks—adults and children–at any given time in the program,” Katzer said.

Nancy Hollinsaid of Malden, Illinois, who is Ostenson’s and Lminggio’s landlord, thinks more landlords aren’t involved because they’re not aware of the Transitional Living Program.

It’s been no problem for her, she said.

“It’s great where you’re assured of rent monthly. I would encourage anybody to give it a try. There are no drawbacks. It’s been all good for us,” she said.

Hollinsaid said it’s rewarding to help families through the work of Community Action.

“They’re doing such a great service. To be a little part of it is such a great thing. It’s too good for us not to stay involved. They take the hassle of being a landlord out of it. It’s a win-win situation,” Hollinsaid said.

For that, Ostenson is grateful.

“We have family and friends, but the support of this program is behind you 100 percent helping you find employment, go back to school, connect to resources in the community and save and manage your money while giving you a nice home. They help you get back on your feet and a second chance for life,” she said.

It also means living in a spacious two-story home with a yard through the one-year program.

“Now we have three bedrooms, a living room, a dining room, a kitchen, full bath, basement and laundry room. It’s a blessing, and my kids absolutely love it here,” Ostenson said.

Katzer said the program provides a foundation for families to be successful.

“If they’re worried every night about where they’re going to sleep and basic survival, they can’t focus on the things they need to stabilize,” she said.

Each family is assigned a case manager with weekly home visits and monthly maintenance checks. They are required to attend six workshops on life skills, Katzer said.

“We’re working with them every week, checking their progress and helping them overcome barriers to get themselves ahead,” she said.