Jason, a father of four, came to the Community Action Fatherhood Initiative program after a long period of incarceration. 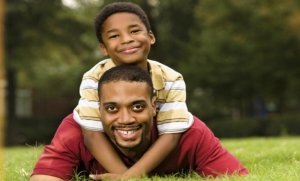 While away from his family he knew things needed to change, most importantly his behavior. He also came to terms with the fact he had anger issues. During his time in the system he sought help through an AODA program. Jason quickly learned how his inability to handle anger was the key to many of his challenges. He completed the program successful prior to his release.

Jason came to Community Action to enroll in the Fatherhood program to seek further help. During his interview he stated not only did he need the program, he wanted it. Jason had been in and out the system for most of his teenage and adult life.

After entering the program his attendance and participation demonstrated his commitment to the program. Jason took all the tools and learning offered by the Fatherhood program, resulting in a full time job at Humane Mfg. After working at Humane for approximately two weeks he was promoted to a lead position. His manager at work emailed Community Action staff stating how happy they were with Jason’s performance.

Jason also enrolled in the TrANS program to receive his flagger license. As part of his career planning this will allow him to join the construction trades. Recent updates provided to staff reflect Jason has his driver’s license, a car and a job. Most importantly his daughters told him how proud they are of him!