It does nothing but get better.

It does nothing but get better.

The young men and women in Community Action’s mentoring program are not your average teens.

“I see a change in their perspective, the way they have respect. The way they communicate with each other,” says group founder Kevin Young.  “Their relationships are different. We teach them to stop, weigh out your options, then proceed. From the first day through the first month there’s a big change [in the students]. It does nothing but get better from there.” 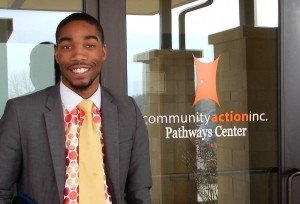 Young, a 21-year-old from Beloit, based the group on his positive experiences with a similar program previously held at Beloit Memorial High School.

“My senior year of high school, I went to BMHS. I saw the full range of what the group did at the school,” says Young. “They would meet between 7:00 and 8:00 every morning before school to do their homework. The teacher would help them if they needed it. That way, there was no excuse for not finishing homework.

“What stood out most to me was how this group helped so many young men academically. Every young man in the group had at least a 3.0 grade point average.”

But the group dissolved when it lost funding, and its adviser was hired at another school.

Young went back to the high school after graduation as a coach for the step team. He talked to the younger members of the previous mentoring program. One student scored a 36 on his ACT but was getting all Fs in school. He told Young he lost his motivation and didn’t do his homework. Young decided to start his own group.

“A lot of people turned me down and gave me the run-around, basically told me I wouldn’t be able to do it,” says Young. “But me being me, I said I can do it.” He was then referred to Community Action.

He sat in on the groups at Community Action and talked to staff about logistics of the program.

“I’d get off work, come to the Merrill Community Center, hold the group and pay for food out of my pocket,” says Young. “A couple parents would help me drop people off. I had seven people in the group. Since then, it’s done nothing but grow.”

He worked with Community Action to enroll the mentoring kids in the Personal Responsibility and Education Program (PREP). They then received funding for food and PREP’s sexual health education, which includes talks of morals, values and the character of young men.

The group is now held at Community Action twice weekly, featuring academics and evidence-based curriculum. A group of young women now joins the young men. The students thrive with the structure.

Young says he loves seeing his dream become a reality when he comes to the mentoring group.

“I want 80-90% of the participants to eventually finish college. I don’t just want you to go, I want you to finish!”
—
This program’s college visits, leadership training and educational field trips are made possible by donations from supporters like you. Thank you!